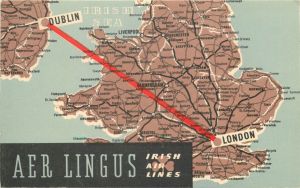 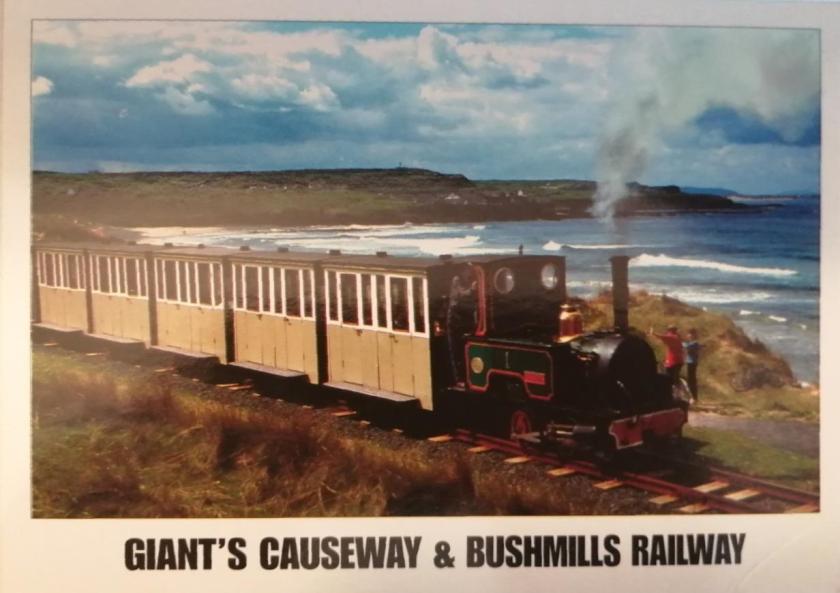 Unknown publisher – possibly the current operators of the ‘new’ railway. The new railway, which runs for two miles along the route of the original electric tramway, has led a precarious existence since it opened in 2002 and is currently closed. Further information:  Giant’s Causeway and Bushmills Railway

A pre-1914 view of the station looking much more well maintained. No publisher indicated. 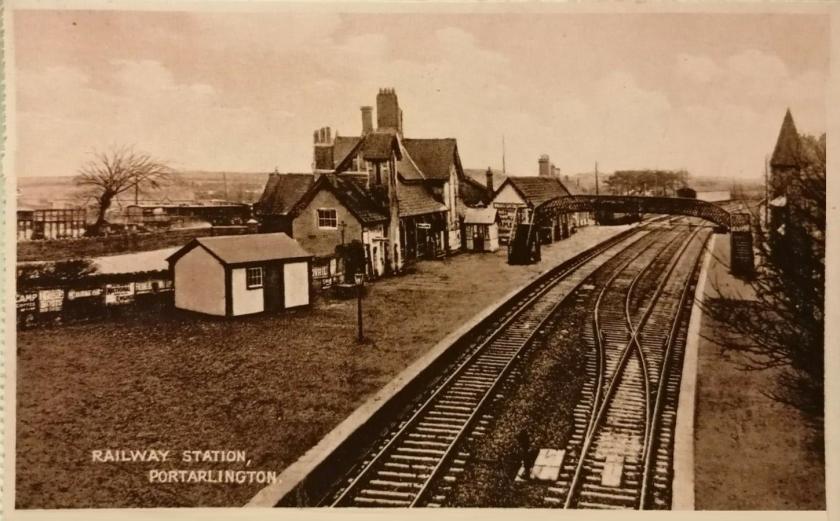 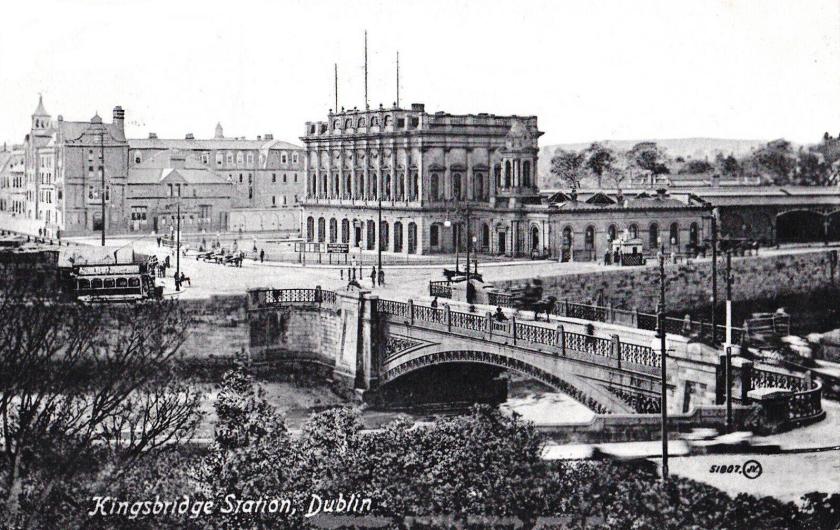 An unusual view from the north bank of the Liffey by Valentine’s – postally used 1919.

A Valentine’s view of the terminus at Belfast, York Road. 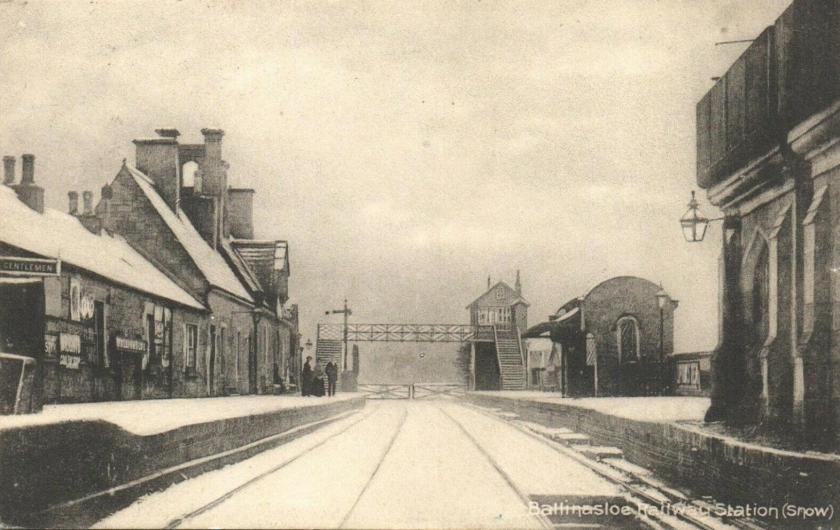 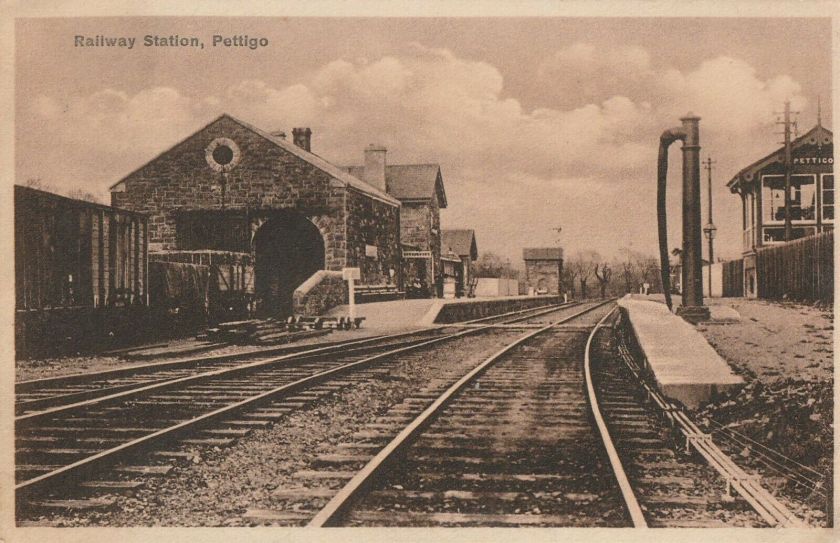 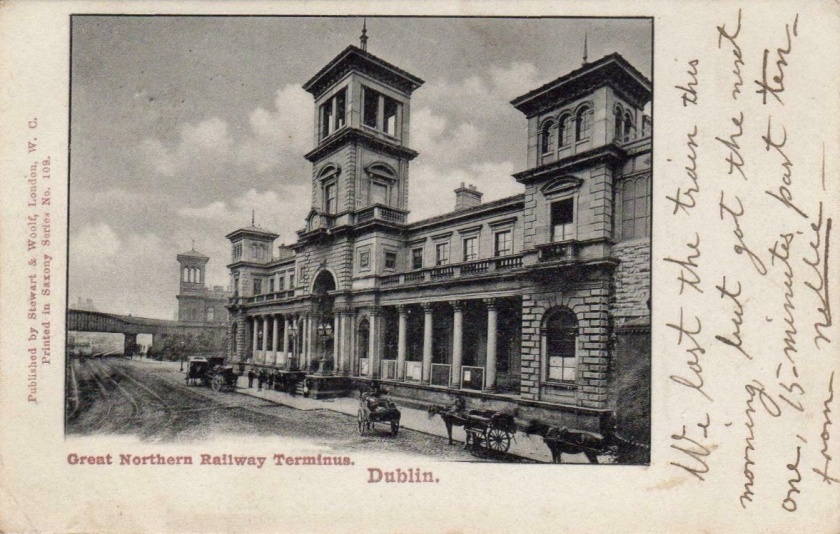 Published by Stewart & Woolf, London and postally used in 1903. 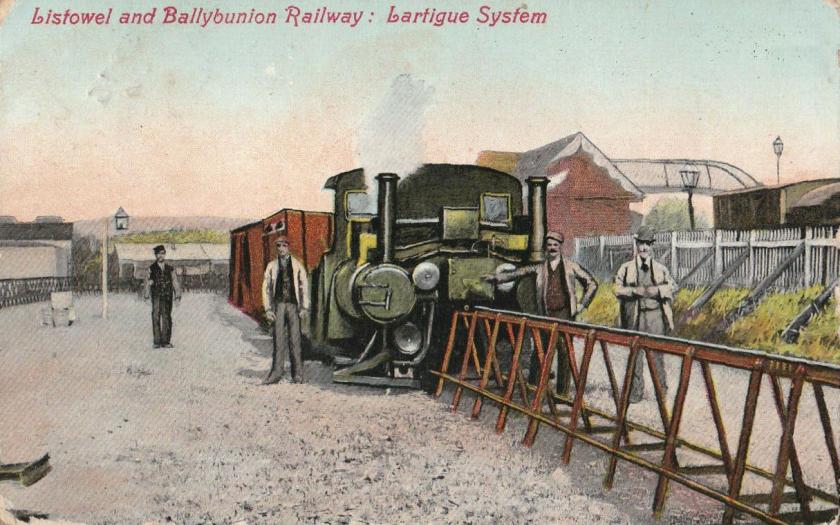 This early Valentine’s card, postally used 1908, gives the railway an even more ramshackle appearance than it possibly deserved.

This card of Ballybunion by Milton’s is from the early years of the railway judging from the well cared for appearance of the station.

Rail-motor on the Cashel branch 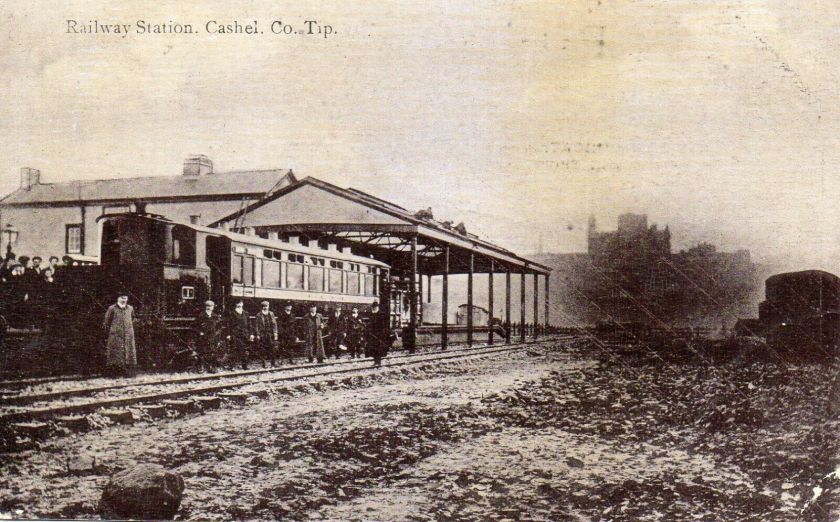 An interesting view by Hely’s of Dublin. Judging by the official looking photograph it may date from the introduction of the Inchicore built Rail-motor No.1. on the branch circa 1904/1905. A short-lived experiment that didn’t work out well and the unfortunate rail-motor didn’t last long after its return to the Dublin area. 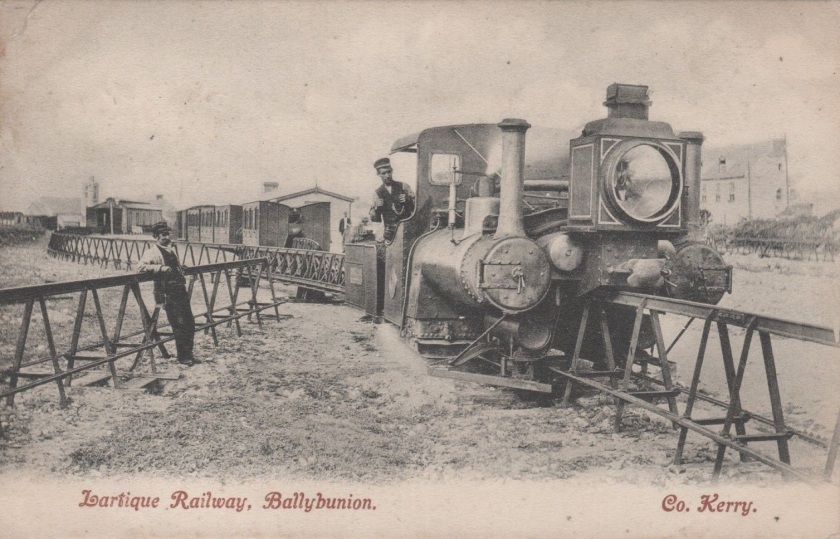 Two Lawrence cards of this most unusual railway.

The “Lartigue” as it was known (after its French engineer) operated from 1888-1924. Today a museum and short replica set-up has been built adjacent to the former standard gauge at Listowel see: www.lartiguemonorail.com 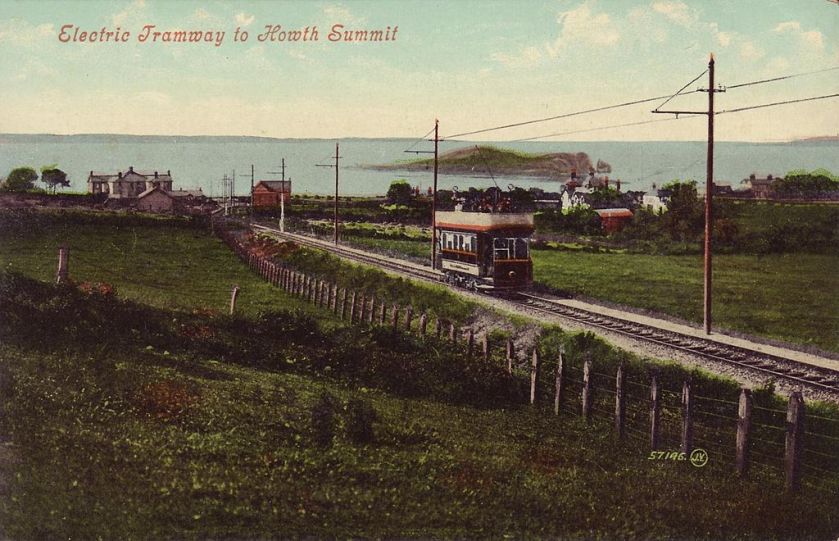 The Hill of Howth Tramway operated from 1901 – 1959 when it was closed down by CIE just a year after taking over the line from the Great Northern Railway. The tram was one of the ‘must do‘ things for Dubliners and visitors alike – along with the Zoo and Nelson’s Pillar. Today almost 60 years after closure there are rumblings about reinstating the line, or part thereof, but don’t hold your breath.  – Both cards published by Valentines.

Another nice view from an unknown publisher.

More about the tramway here: Wiki: Hill of Howth Tramway and while you await the return of the tram check out this wonderful film and weep for what might have been.

Devoid of rail services since 1959 Monaghan was once an important railway centre as evidenced by the substantial station building featured on this card – postally used in 1906. No publisher given.

The Glens of Antrim Tour

The Holden train was a new concept in Irish tourism. In 1902, A.W. Holden, a Larne hotelier who had hired trains from the Belfast & Northern Counties Railway (BNCR) for his summer tours, approached the railway to provide him with a special train. York Road works built the all first class four-car train. Three of the coaches were saloons and the fourth was a restaurant car, all being furnished to a high standard. They were bogie vehicles with corridor connections; the lower body panels were finished in match boarding and the end doors were recessed in the manner of Pullman cars. Two six-wheel vans were fitted with corridor connections with the train.

The train entered service in 1903 shortly before the end of the BNCR’s independent career. Based at the Laharna Hotel, Larne, Holden’s tour visited most of the popular tourist attractions in north-eastern Ireland over a six-day period. During this time, it covered some 400 miles of railway travel and a further 40 miles by road. The tours ran until the outbreak of World War I. – Wiki 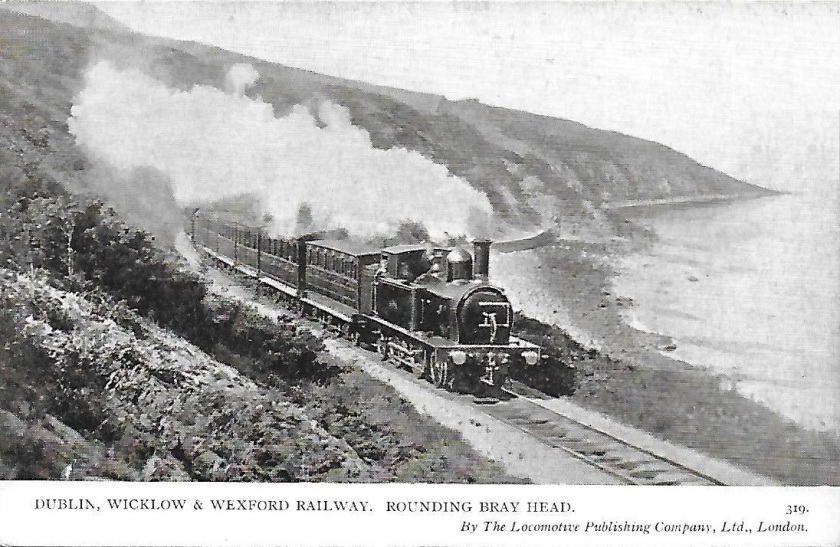 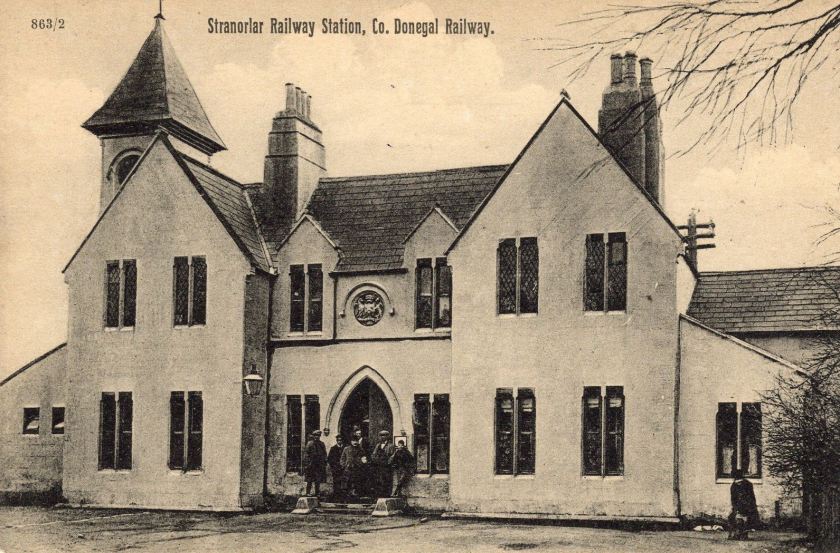 This is a much sought after card and sells for £30+ on the rare occasions when it appears for sale.

Stranorlar was the HQ of the County Donegal Railways narrow gauge network and the station building was a suitably grand edifice – note the company’s coat of arms over the entrance. The station survived the closure of the Co. Donegal Railways in 1959 but was ultimately demolished by CIE in favour of a lorry park – even the carved coat of arms ended up dumped!

OUR LOCAL EXPRESS – Dublin to Howth

Nice view of Fivemiletown – unknown publisher – of interest to the vintage road vehicle enthusiast too!

Scarce card showing one of the company’s locomotives with technical details on the back. One of a series published by Raphael Tuck.

A poor quality, locally published card which I purchased in a Cappoquin grocery in the late 1970s! It was still being sold as a current tourist postcard despite its obvious antiquity – even the railway had been gone since 1967.

One of a series published by the RPSI in the late 1970s. 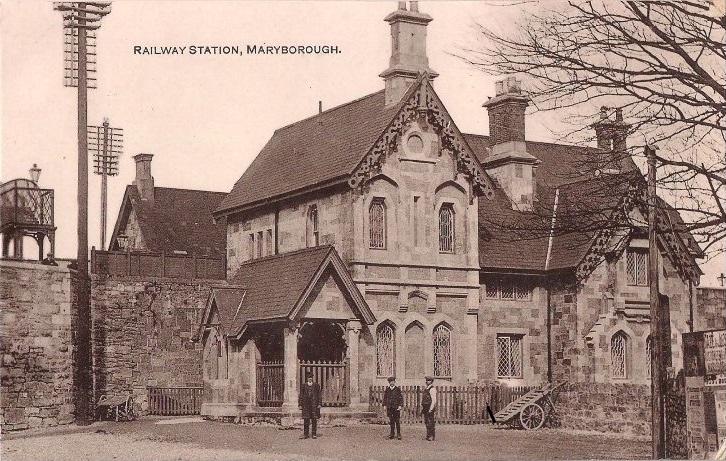 Maryborough Station on the Dublin/Cork line opened in June 1847. The town and station were renamed Portlaoise in 1929.

A set of cards published by the late lamented Exchange Bookshop, Dalkey, Co.Dublin. Based on original paintings by John Harris (1791-1873) which were first published by W.F. Wakeman, Dublin, in 1834. 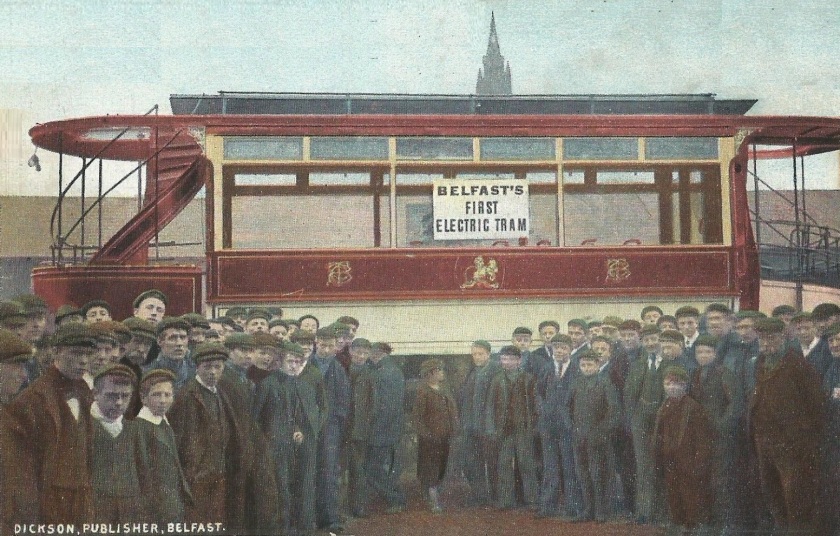 The Belfast tramway system was established in 1872 by the Belfast Street Tramway Company and was horse worked from the outset. However, the system was taken over by Belfast Corporation in 1905 and electrified in the same year.

This card by Dickson of Belfast presumably dates from the same year.

A technical series designed for enthusiasts from the 1950s (?). No publisher given.

In the days before the new Irish Transport Galleries were built at the Ulster Folk & Transport Museum in Cultra, the collection was housed in a cramped old warehouse in Witham Street, Belfast. The carriage featured in this early 1960s card of Witham Street has since been fully restored and is on show at Cultra.

This series appears to date from the 1950s or were reproduced in that style. Unattractive and only for the diehard transport card collector.

An unusual early card showing Lismore Station on the Waterford/Mallow line – closed in 1967. The imposing station was paid for by the local landlord, the Duke of Devonshire, and his family coat of arms cut into the stonework of the building are still visible today.

Cloghan Station was a minor stopping place on the Stranorlar/Glenties branch of the narrow gauge Co. Donegal railway system. The branch operated from 1895-1947 when it was closed as a cost-cutting measure. This “Milton Series” card by Woolstone Bros., London, sold on eBay (June 2016) for £12.50 – quite a bargain as it normally fetches in the region of £40.00. 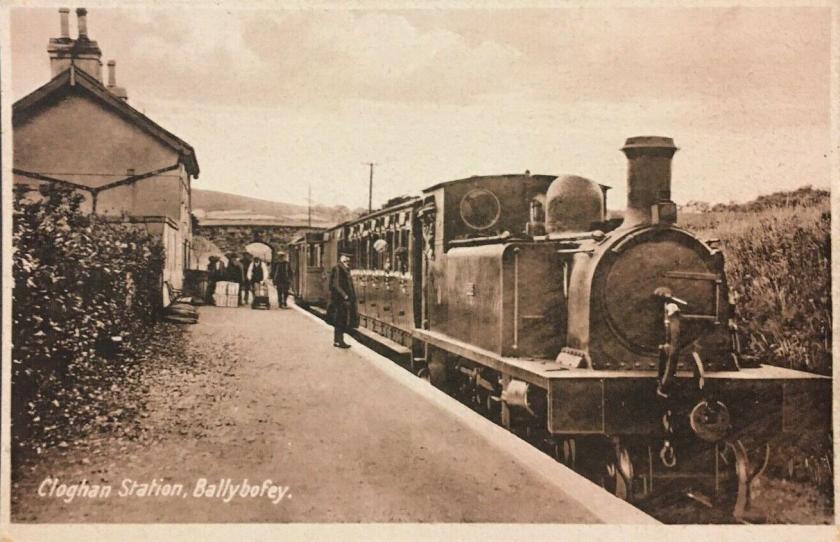 Above a b+w version of the same scene by Woolstone Bros., doesn’t have quite the same appeal but is also very hard to come by. 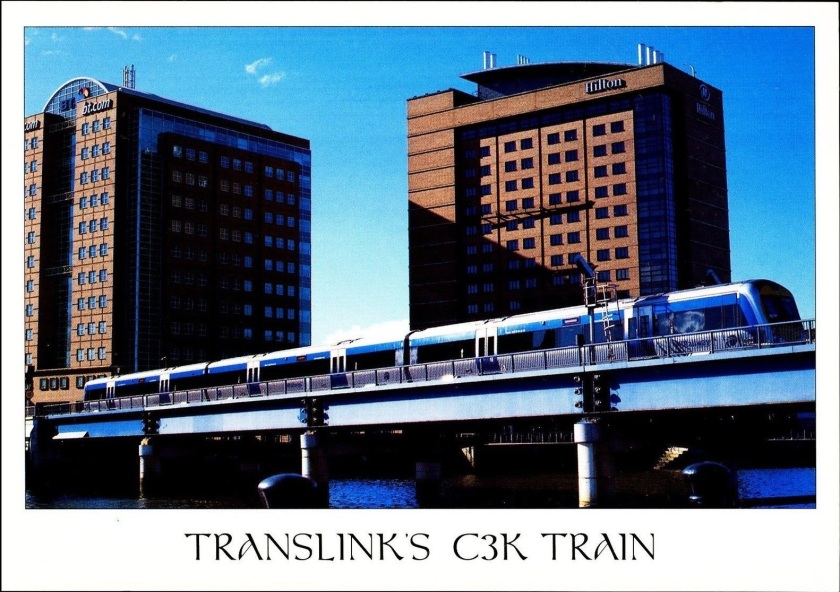 Card No.5. by the Locomotive Publishing Company Ltd., London. 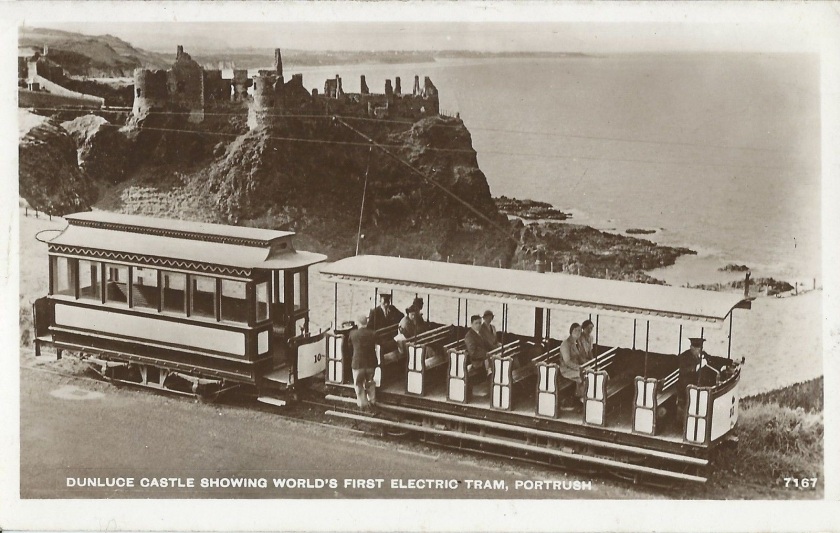 A superb view with the precariously perched Dunluce Castle in the background. 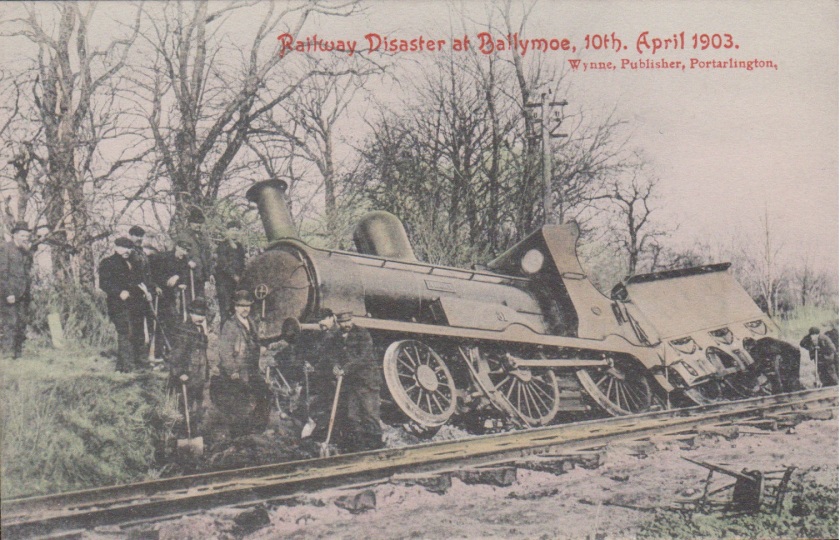 A derailment on the Midland, Great Western Railway near Castlerea in County Roscommon which resulted in 1 passenger killed and 11 injured.

The Bandon River and viaduct from a Real Photo card with no publisher given.

The Cork, Bandon & South Coast Railway was closed by CIE in March 1961 and today only the bridge piers remain.

A strange card – possibly (?) during the period when the Great Southern Railways were given legal powers to buy-out competing haulage firms.

Card presumably published by the company itself.

No.5. an 0-6-2T locomotive built for the Cork & Macroom Direct Railway Company by Andrew Barclay & Sons of Kilmarnock, Scotland in 1904.

Left to right: Steam hauled railtours at Askeaton, Co.Limerick and near Portadown, Co.Armagh. Cards published by the Railway Preservation Society of Ireland circa 1984.

Above: The Dublin – Queenstown Mail in Great Southern Railways days – a rather fine card by Barnard Way and published by Tucks. I went mad – all of €4 on eBay!

Ballydehob Railway Station – postally used 1904 – one that got away! Sold for £26.26 on eBay tonight (15/12/15) – too rich for my blood and anyway my interest in railways has severely diminished with the passing years. A rare picture though and one that I hadn’t seen published anywhere before. More about the Schull & Skibbereen railway here.

An interesting view of the Mail Boat Pier in Dun Laoghaire on this official LNWR card – I have no recollection of the turntable in the foreground. Above, another superb card which I now regret not buying. Published by Valentines it went for very little on eBay last year.

I admit to being biased in favour of railway cards as they are hard to beat for colour and majesty. The one below is one of my favourites but sadly not in my collection. 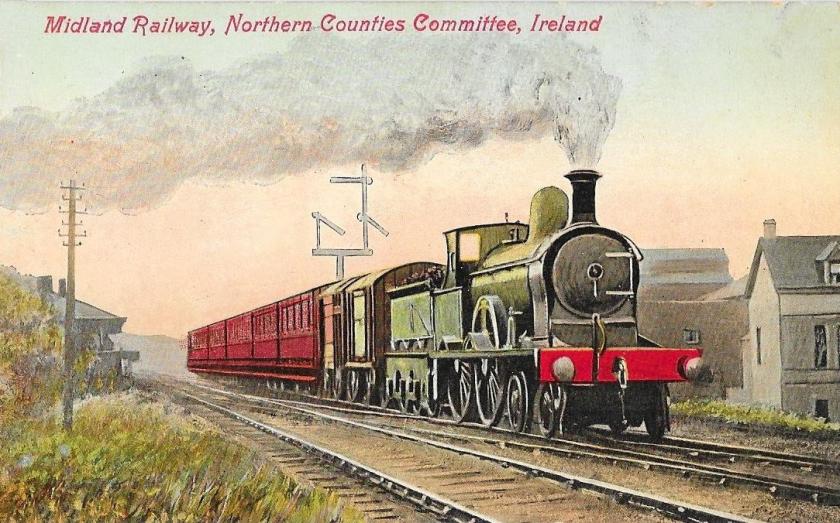 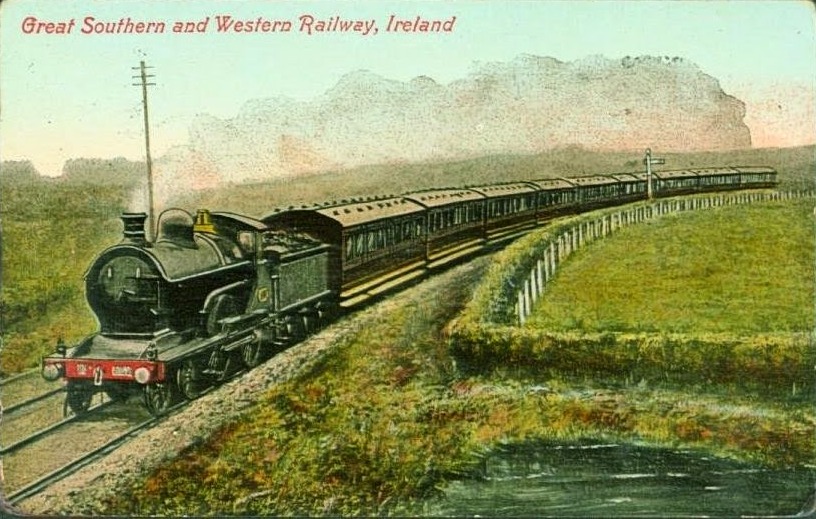 Another GS&WR card – this time “The Killarney Express” by the Locomotive Publishing Co. 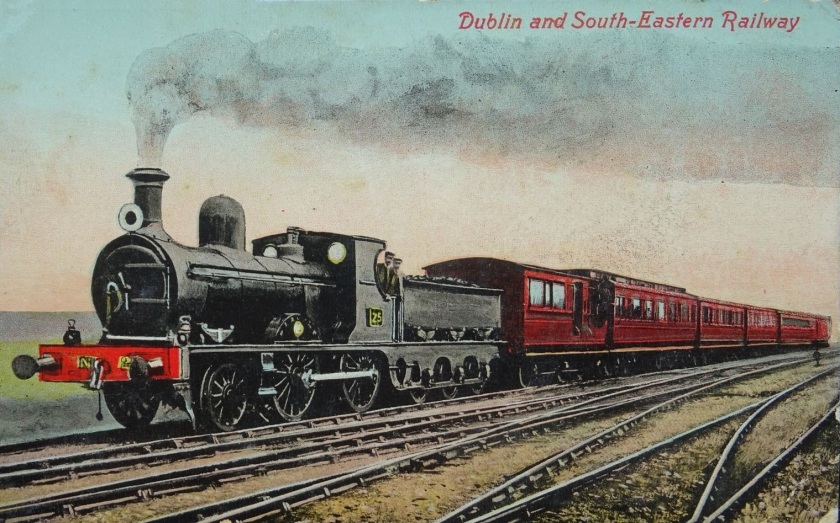 Even some of the minor lines featured on postcards and the narrow gauge Cavan & Leitrim Railway was once such concern. The card above – published by Woolstone Bros. in their ‘Milton Series’ – shows a staged (presumably official) photograph of the company’s principal station at Ballinamore, Co.Leitrim.

This site uses Akismet to reduce spam. Learn how your comment data is processed.