Picked up this fellow for just £2.50 on eBay. I felt sorry for him as he had remained unsold for months and it was the equivalent of buying an unloved teddy from a charity shop. It had been used as a Christmas card but not posted. Signed from Ruby, Basil and Dad….I doubt any of them or the artist suffer from headaches anymore.

Lots more hand-painted cards on the Hand-Painted page and on my Irish Postcard Forum here: www.irishpostcards.boardhost.com do sign-up and get posting! 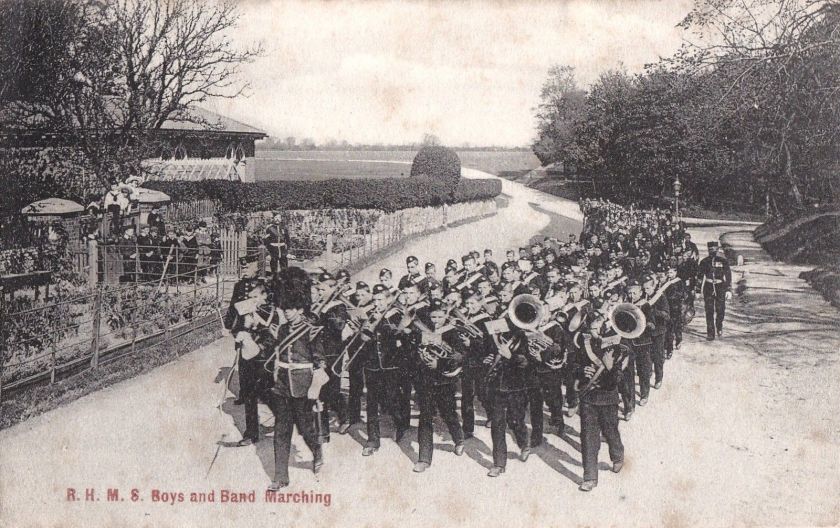 I came across this card for the “Royal Hibernian Military Academy” on eBay recently and was intrigued as I had never heard of it before. A synopsis of the Academy’s foundation in Dublin in 1769 until its transfer to England following Independence in 1922, may be found here.

There’s a strong sense of pathos about an institution set-up for the orphaned children of British soldiers itself becoming a feeder school for the army! The school buildings are still extant in the Phoenix Park, and after a period as an Irish military hospital became St.Mary’s Hospital in 1948 – a role which it still serves today.

I let this one go today, it wasn’t a thing of beauty but I half wanted it just for the sake of completeness. A hand-coloured card with no indication as to the publisher and a poor representation of the artist’s work. Presumably from the late 1930’s and shortly before the advent of colour photography swept away the awful hand-coloured process.  Still my heart wasn’t it and so I let it go.

I had never come across this type of card until today when I stumbled across two of them on Etsy. Measuring an incredible 3.5 in x 11 in they must have been difficult to send through the mail without suffering damage. According to the Tuck Database they date from 1907 and were issued as a set of six. Reasonably priced at €9 each plus shipping (from the USA) I decided not to take the risk of damage – even in a card backed envelope. If you’re interested they are here.

I recently picked up these four unused Scholastic cards from a US seller on eBay – all of €4.60 including postage. No artists signatures on any of them, or series numbers, but at least all are titled! Three of them I hadn’t seen before and the strange “A Farmyard Scene” – noted previously but not one that I would have really wanted – and only purchased as it was so cheap.

Left to right clockwise: “A Farmyard Scene“; “The Bridge in the Woods“; “The Road to the Mountains” and “The Edge of the Lake“.

Any clues to the artist(s) identity would be welcomed.

I came across this unusual card on eBay last week and was slightly baffled by it. At first glance it seems to be hand-painted and yet it has what appears to be printed titles. I contacted the seller and it turned out to be a Lawrence card which had been over-painted. It sold for £7.51 – I wasn’t tempted!

I have been making steady progress with my collection of hand-painted postcards, and have picked up several nice examples in recent weeks. Last week I purchased the two attractive cards – below – as soon as I came across them online.

At the time I knew at once that I had to have them as they were good quality, of locations that I collect and there was just something about them. However, when I got them into my hand they seemed strangely familiar. When I compared them with my “Jotter” cards of the same locations – bingo! It was the skeletal figures in both the “Jotter” and the hand-painted cards that stand out and then everything else falls into place. Some birds and a figure are missing in the Black Head card, and the sky is totally different (and superior?) in the hand-painted Glenarm Castle card. The details of the Barbican are slightly different too, but the fisherman, his companion, and spectator on the bridge are on both cards. Click on images to enlarge.

The hand-painted cards are without doubt faithful copies of the “Jotter” postcards – above left – albeit with a certain artistic licence. Who was the artist? The only clue as to their identity are the initials JB (?) on the bottom right hand corner of both cards. The initials look like the numerals 93 on the Black Head card but on the Glenarm Castle card they are tight together and clearly initials.

The “Jotter” cards appeared as part of a set of six first published in 1908/09 by Raphael Tuck & Sons in their “Emerald Isle” series. I suspect that my two hand-painted cards date from roughly the same period. I would very much welcome any help with this mystery.

I had to have this card – don’t know why, just something about it. I normally only collect topographical Irish cards published by Wrench but this has such an innocent ‘devil-may-care’ charm about it. The same cannot be said for some of the others in the series which are borderline racist. All the more surprising, given that Evelyn Wrench was from Ireland but, perhaps, not of Ireland. Anyway, I’m going to do something with this old fella – not sure what but he’s going to get another airing somewhere. This particular card was posted in England on the 12th August 1905.

The Payrrpoint Morrgin/J P Morgan referred to on the card was the famous American banker about whom more information than you could shake a stick at may be found here.

If you’re baulking at the prices being asked for postcards of the Easter Rising you may like to consider this book published at the end of 2015 by Stenlake Publishing (Scotland) as a good alternative.

From the publisher’s blurb:

Essentially the book is a narrative about the Easter Rising of 1916 liberally illustrated with original picture postcard images. The Rising and its immediate aftermath were comprehensively recorded by photographers and postcards of the events and personalities involved were quickly published. The author has probably the most extensive collection of these cards and 244 of them are shown in the book which also deals with the War of Independence, Treaty Conference and the Civil War. Also included are chapters on the postcard publishers themselves with details of these firms’ history and the cards they published for the Rising.